Turn and Talks are a quick low-prep strategy for assessing students, having them share background knowledge or clarify thinking, and increasing student engagement. However, it doesn’t always work well. Sometimes it seems like, when asked to turn and talk, it is the only time students are quiet! Other times what they talk about is completely off- topic!

Here are some suggestions for making “Turn and Talk” more effective.

A turn and talk shouldn’t last longer than a minute or two, or students will lose focus. Using a visual timer such as Online Stopwatch works even better. Most students (and teachers) don’t have a good sense of passing time while engaged in an activity.

Tell students to use the starter to begin discussion. Sometimes“turn and talk” doesn’t work because students don’t know how to begin academic conversations.

A-B Dyads are a specific type of turn and talk. One student is named A, and one is B. Tell each student what they are to do. For example, you could say “Student A, discuss any word choices in the text that could reflect the tone. Student B, repeat student A’s words and add your own. Then provide a word that describes the tone, and provide a justification. Student A, offer your tone word and justification.”

If you’ve been frustrated by “Turn and Talks” in the past, don’t give up without trying one of these high-leverage strategies.

Word Study Uno has been a favorite for reinforcing word study for spelling or morphology (roots, prefixes, and suffixes) knowledge.  Word Study Uno is just one of many fun word study activities in the book Words Their Way by Bear, Invernizzi, Templeton, and Johnston.

In the traditional game of Uno, players match numbers or colors to the top card on an incrementally increasing stack.  Once a player lays down all of his or her cards, the game is over.  The first player to lie down all of his or her cards wins.  In addition, there are special cards that make players draw additional cards (Draw Twos), lose turns (Skips), and change the color of the cards to be matched (Wild Cards).

Instead of matching by color or number as in traditional Uno, students match cards by either spelling patterns or morphological structures in Word Study Uno.   Traditional special cards like Skips, Draw Twos, and Wild Cards are integrated into the game as well.

To introduce the game, I ask students if they have ever played Uno before to determine their prior knowledge of the game. I often ask students who have played before to share their understandings of the rules with those who haven’t, offering  clarifications as needed.

The example photos I am including are from a Word Study Uno game used with students who struggled with short a and long a spelling patterns.  Some of the words are different from words the students had studied in order for me to assess whether they could transfer spelling pattern knowledge. 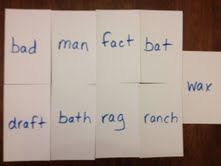 Long a CVCe (Please forgive this one’s “sidewaysness.” I can’t seem to get it oriented correctly!) 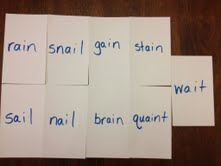 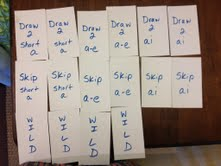 Students enjoy playing the Word Study Uno game. During this particular game, I asked the students to say the words aloud when they laid them on the table. Students were tentative about this in the beginning. I repeatedly asked them to pronounce the words, and I modeled saying the words as I laid down my cards. Students’ confidence increased, since they began to see that they would be able to pronounce the words correctly based upon the spelling patterns. For instance, bath and bathe made students a bit nervous, but as we discussed that the silent e denoted a long a sound, they tackled other unknown words successfully.

The same process can be used for roots, prefixes, and suffixes as well.  However, one potential morpheme learning activity is building words with cards. My friend and colleague, high school literacy coach Kathy Bonyun (@kathybonyun), developed a game called OPA! (Greek and Latin roots, get it?)  Students must build words from their hands (a little like Scrabble), but they must also lay down prefixes, roots, and suffixes on previously built words to create new words.  The student who is the first to lay down all of his or her cards wins (sort of like Uno).  You can easily create your own hybrid game such as this, or you can pick up a set that Kathy created from her Teachers Pay Teacher site.

Are there card games that use to build students’ word knowledge?  What has worked for your students? What didn’t work?

After attending the NCTIES 2014 conference, I have learned about so many cool new technology tools.

I have to share the really awesome ColAR app.  This morning I printed some of the free coloring pages from colarapp.com.  This particular one  is  a “holiday” image of pumpkins.  My son loves pumpkins all year, so I thought it would be a perfect one to try.  He and I commenced coloring the pumpkins together which resulted in this final product.

But then, using the the ColAR (the capital AR stands for Augmented Reality) app on the iPad brought the coloring page to life.

These are not static images.  They are dancing, jumping, and spinning.  My son loves this, and so do I.  You must check out this fun app whether you are a parent or a teacher!

You are sure to hear more about things I learned at NCTIES over the next few weeks.